by roland b. stark


Illustrating partial correlation vs. interaction:
what they are and how they differ

It's easy to confuse partial correlation with interaction. Both of these phenomena involve a change in the way we might perceive the relationship between two variables once we account for a third. Both involve the way the big picture changes once we make that third variable visible. Unable to find a graphical representation that clarified the difference to my satisfaction, I created the set of charts and brief commentary presented below. All of the examples are hypothetical, and all involve two continuous variables and a third, categorical variable.

Partial correlation entails looking at a single X-Y relationship to see if it changes when we include a third variable in the mix. In Figure 1, if we ignore the fact that there are two types of points, we see a fairly strong relationship between X and Y, with an r of perhaps 0.75. This relationship does not look different when we become aware of the two groups: there is still a diagonal trend of approximately the same strength (the bands of points have the same width). Thus in this case the partial correlation is the same as the more "naive" finding of the original, zero-order correlation. 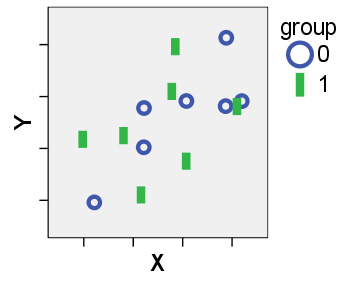 In Figure 2, the picture changes when we recognize that there are two types of points. Each band of points is narrower, and thus the correlation stronger, when we look at either gender separately, compared to when we aggregate. Thus the correlation -- still a single, summary number -- between salary and years in job becomes stronger when we adjust or control for gender. 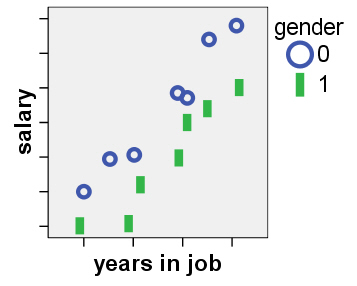 Figure 3 presents the opposite scenario. In the aggregate, or when we are blind to group membership, we see a fairly strong positive correlation, but it completely evaporates if we look at either group on its own. Within either of these hypothetical grade levels, height bears no relationship to reading score. In this light, the original, zero-order correlation is clearly spurious. 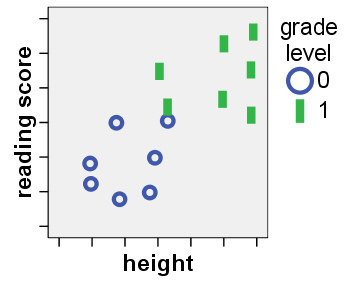 Next we come to interactions. You may find such effects described using the terms moderator effect, product effect, joint effect, or multiplicative effect. In Multiple Regression in Behavioral Research, the estimable Elazar Pedhazur makes an impassioned case for distinguishing true interactions, which only apply in experimental studies, from the types of joint effects seen in most research, including observational, correlational, and descriptive studies. In many of these cases, the two variables which are said to "interact" are really part and parcel of rather than orthogonal to one another. Thus any investigation into joint effects is best done with careful attention to construct validity and the nature of the variables measured.

In a nutshell, joint effects mean "different slopes for different folks." Figure 4 shows a fairly radical case in which the consideration of this third, group variable makes a big difference to the conclusions we draw. It's not just that the band of points becomes narrower or wider once we account for this third variable (as in the partial correlation examples above). Rather, the entire direction of the relationship changes depending on the group. Group 0 has a very strong positive slope, whereas group 1's slope goes in practically the opposite direction.

Figure 4. A joint or "interaction" effect 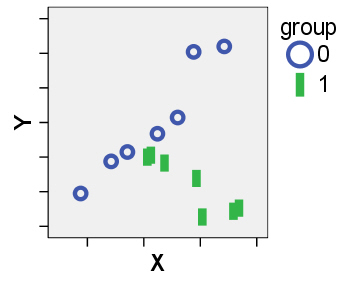 Figure 5 shows a different sort of joint effect, another example of "different slopes for different folks." Here, if we were blind to group membership we would see a fairly strong positive slope, with an r of perhaps 0.8. Accounting for the two groups reveals a near-perfect X-Y relationship for group 0, but no relationship at all for group 1.

Figure 5. Another joint or "interaction" effect 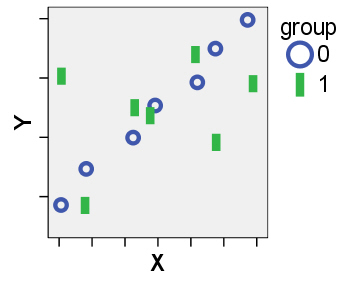 I welcome your comments.